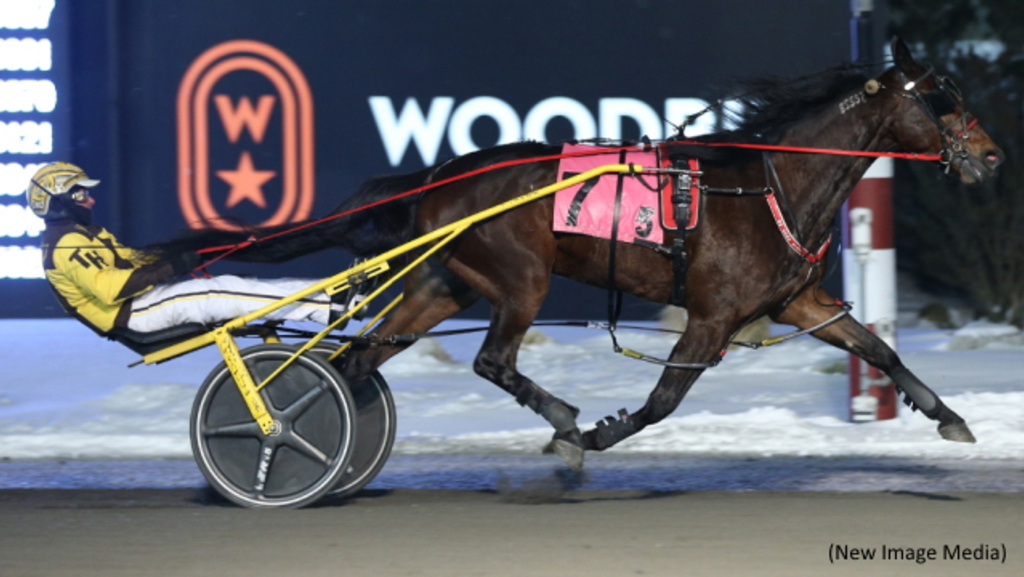 Round one of the Family Day Trotting Series went postward along with another Pop Up Series for conditioned claiming pacers during Monday's 10-race card at Woodbine Mohawk Park.

Truffles Too came out on top in the lone division of the Family Day Trotting Series, and he did so in front-stepping fashion for driver Trevor Henry. In search of his first win of the season, the four-year-old son of Donato Hanover-Truffles marched to the lead from Post 7 and never looked back once he claimed the top spot. He led through splits of :28.2, :58 and 1:27.1 before using a :28.3 kicker to win by 1-3/4 lengths over race favourite Urntrouble Hanover in 1:55.4. Dealin With Dewey rounded out the Trifecta ticket.

Bill Budd trains the seven-time winner for Deanmar Sons Stable, Peter Miskolczi, John Freda and MPG Racing. He now owns a 1-3-1 record from five trips to the track this season. He’s stashed away more than $28,000 during that stretch, and over $85,000 to date.

Always Been Crazy turned a two-hole trip into a 1:56.1 triumph in the first division of the Pop Up Series for conditioned claiming pacers. Tyler Moore plugged the Pam Forgie trainee into the pocket while Believe In Brian shot to the top and threw down first-half fractions of :28.1 and :56.4. Believe In Brian was still the leader at the three-quarter pole in 1:26.1, but Always Been Crazy was bearing down fast from his first-over position. Always Been Crazy only needed a final quarter of :30 to win by a length over Sights On You. Dragon The Line took home third prize.

Sent off as the 6-5 choice, the four-year-old son of Sunshine Beach-Notable Beauty won for Forgie and partner Donald Sholdice of Brussels, ON. It was the fifth straight win for the gelding who was claimed from the winning effort. He’s banked more than $55,000 to date.

Perpetual Rock pulled off a startling upset when he captured the second division at odds of 43-1 for the tandem of driver Travis Cullen and trainer Joey Squires. Race favourite Elroy Shiner carved out fractions of :28.1, :58.1 and 1:27.1 before giving way to three rivals in the late stages of the $12,000 affair. Perpetual Rock, who got away fifth, found himself fourth over at one point before advancing on cover and the firing home in :29 to win by a head over Diamond Rock in 1:57.1. Sir A took home the show dough.

Trainer Joey Squires owns the four-year-old son of Pet Rock-Vanity Fairest with Crazy Parrot Farm LLC of Leander, TX. The gelding nabbed his first win of the season and the seventh of his career. The $6,000 payday bumped his bankroll to $38,614.

Slick N Sporty was a popular winner in the final division winning by a two-length margin for driver Bob McClure. He put the seven-year-old son of Sportswriter-Fanciful Hanover on the lead from Post 5 and together they led the field through fractions of :28.1, :57.3 and 1:27.4. A :27.4 closing quarter propelled the streaking pacer to the 1:55.3 triumph over Heresthatmanagain and Southern Road Trip.Sent off as the 1-2 favourite for owner/trainer Josh McKibbin of Belwood, ON, Slick N Sporty extended his winning streak to three-in-a-row while racking up his sixth lifetime tally. The career winner of over $37,000 was claimed from the winning effort.