Harness: Jimmy Freight motoring on as a stallion and on-track warrior 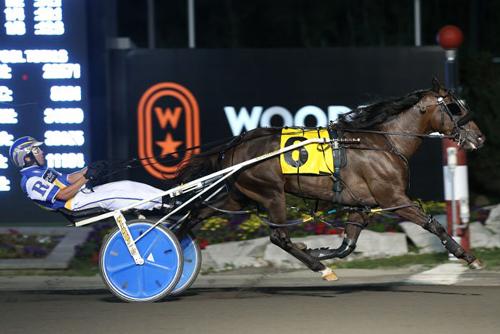 It didn't take very long for Adriano Sorella to learn about the breeding business. As the owner of Jimmy Freight, Sorella would recognize at the outset of the stallion career many of the pitfalls and turbulence created in the breeding process.

"Some of his semen was swimming in circles," Sorella said, describing a condition that would hamper Jimmy Freight's first year as a stallion in 2020 and limit the number of overall yearlings, many from the resulting number that will likely sell this fall.

"It's hard to know the exact number," Sorella said as to the actual first crop from Jimmy Freight, a son of Sportswriter standing at Winbak Farms of Ontario.

There were a multitude of issues in owning a stallion that Sorella would learn as he went along and that led to an ultimate decision last June to bring back the $1.3 million winner to the racetrack. The hope of course is a return to the prominence he saw as a 4-year-old that saw him capture the Dayton Derby in September of 2019 in a 1:48 3/5 clocking.

"This is a business and I just looked at the number of horses that raced in Preferred company at Woodine Mohawk Park and that they earned upwards of $200,000-$300,000 on the year," said Sorella. "When Jimmy retired from racing, he was very sound. There are other horses when they are retired that have issues, but he didn't."

So, after the breeding season ended in 2021 Sorella had Jimmy Freight sent to trainer Richard Moreau with an elongated timeline for his return.

"I told Richard from the start not to rush him back. Once I made the decision, I felt he would need more time not just to get back to the races, but hopefully show the ability he did when he was first retired," said Sorella.

So, the long-term game plan for the now-7-year-old would allow the trainer time to convert Jimmy Freight from a stallion to a racehorse and then hopefully back into a champion.

"A lot of people expected him to bounce back and be the same type of horse after four starts," Sorella said. "It's hard to be out for two years and four months and regain form that quickly. It's an entirely different situation when a horse is on a farm versus in active training."

While some have been worried that Jimmy Freight would not come back to be the same horse he once was, Sorella is more than patient and recognizes that winter racing at Woodbine Mohawk Park is hardly a proving point in the process.

"I texted Louie [Roy] after that race on February 5 and said 'what are you guys doing going to the half in :59?' Sorella said. "We're trying to find out if it's worth making stakes payments on the horse and they're going so slow to that half that everyone is going to come home in 26 and a piece and just race one quarter."

Fortunately, Jimmy Freight would return on February 12 just three days before major stakes payments would need to be committed to and flash some of his former power. Racing in a Preferred Handicap event at Woobine Mohawk Park he won for just the second time since his return late in 2021 and posted a 1:53 2/5 mile time that included a 26 3/5 final quarter.

"The real test is going to come in the summer," Sorella said, predicting that Jimmy Freight could get a chance to showcase his extreme speed when conditions are far more conducive to do so.

"We've made him eligible to the Canadian Pacing Derby and The Breeders Crown."

Then of course there is the breeding side of the business and Sorella seems hopeful that a possible frozen semen deal can be reached, with the U.K. a likely destination. As for this year's breeding season at Winbak in Ontario, Sorella has set the stud fee at $3,500 but offers various incentives for breeders that commit more mares.

Sign up for our FREE DRF Harness Digest Newsletter

"I have made deals to charge $2,500 for anyone that breeds two mares and has two live foals," said Sorella. "Likewise, anyone that wants to breed three mares and have three live foals will pay just $2,000. That fee is only good if they actually have three foals, if they only have two it will be $2,500."

The fees are bargain basement types, but at the same time Sorella feels that with a business model that relies more on Jimmy Freight earning money while on the racetrack, it's an approach that can work not just for him but others that wish to breed and race during the same calendar year.

Sorella understands that there can only be a small group of stallions that can breed a high number of foals annually and be profitable. "I'd say there are basically 10 stallions in the U.S. and maybe two in Canada with large books," said Sorella.

Prior to the initial difficulties Jimmy Freight had during his stallion career, Sorella had a solid belief that his bloodlines would become essential for this industry.

"He's a son of Sportswriter from the Artsplace line," said Sorella. "People kept on saying we needed to preserve that line. To be honest Sportswriter as a stallion had developed a reputation as a horse that could give you a high-caliber 2-year-old but that the horses would go no faster at 3." That reputation carried on to the point that Sorella himself had trouble believing that Jimmy Freight would possibly excel as a 3-year-old. "I kept saying he's a Sportswriter," Sorella said, recalling the period when he expected the bottom to fall out. "But Andrew Harris reminded me that he's not a Sportswriter but an Artsplace."

Jimmy Freight is certainly an exceptional horse as to his racetrack achievements. "If you look at the sons and daughters he's had both here [Ontario] and Down Under he's got like 5,000 foals. Jimmy Freight is the only one that earned over $1 million. That has to say what kind of special horse this is," Sorella said, putting an exclamation point on the past racing career of his horse and perhaps indicating to those interested in breeding that he stands apart from his sire in many ways.

Later this fall Jimmy Freight could be racing in the sport's biggest events while simultaneously his first crop will be up for sale. For Sorella, who already has five homebreds, it will be a busy time. "I'm definitely going to buy a few more," Sorella said. Perhaps others should do the same.