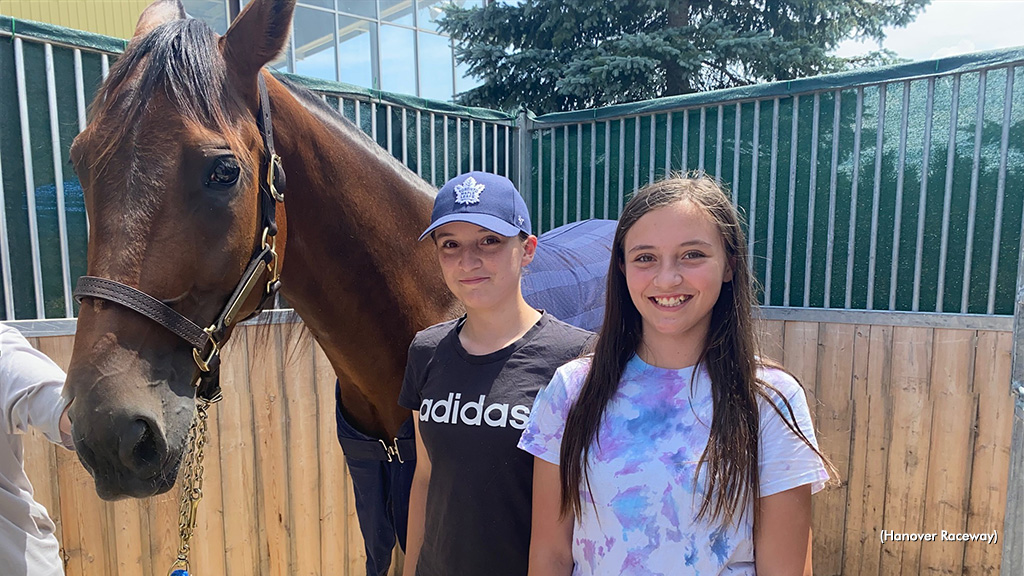 It was sunny and beautiful day for Trevor Henry day at Hanover Raceway. A large crowd was on hand to take in the festivities Saturday afternoon (July 23) and recognize Trevor while supporting the Canadian Tire Jump Start charity.

Henry — a 10-time Driving Champion at Hanover Raceway — was joined by Canada's reigning Horse of The Year Desperate Man, who won the Pepsi North America Cup last season with Henry in the bike. The duo also led the post parade out for all three Dream of Glory eliminations.

The Arthur, Ont. native signed autographs and had meet and greets with a multitude of fans, then got in the race bike and drove three races on the card. The fundraising effort in all raised $10,163 for Jump Start.

In the first elimination, Bob McClure guided Balanced Image Stakes champion Sea Can to victory by a length in 2:00.3 for owner-trainer Mark Etsell and his partners Terry Devos and Peter Porter. The Muscle Mass gelding benefitted from a pocket trip behind pacesetter Renegade Gypsy and found racing room in the stretch to claim the victory and punch his ticket to next week's final. Renegade Gypsy held for second while The Champ Champ was third.

In the second Dream of Glory elimination, Lenis and Austin Sorrie went first over past the half and ground down tempo-setter Three Finger Pour and Trevor Henry, drawing away in the stretch and holding off a late charging Promise For Life to win in 1:59.1. Three Finger Pour held onto third. Brian Lee trains the gelding by Il Sogno Dream for owner Leonard Christopher.

In the final Dream of Glory elimination, Drinks At Home (pictured above) and driver Bob McClure collared a hard-used Armstead Cole, moving clear at the top of the stretch to clock the fastest elim with a 1:58.1 win. Fast-charging Evil Guy and Trevor Henry got up for second and Armstead Cole settled for third. Luc Blais trains the victorious Royalty For Life colt for owner Determination.

The post position draw was made for next week's $52,200 Dream of Glory final and looks like this: