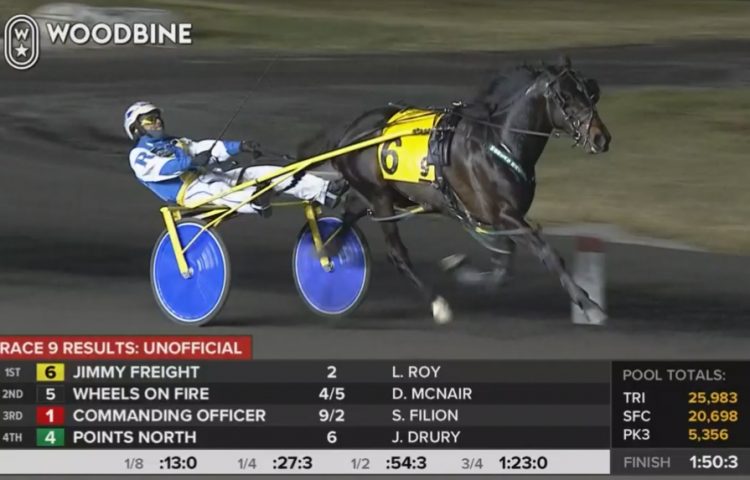 With a strong first-over move against Wheels On Fire, Jimmy Freight was able to grind it out and pull away in the stretch to win the $36,000 Preferred-Handicap Pace at Woodbine Mohawk Park Saturday.

Harness racing driver Louis-Philippe Roy sent Jimmy Freight right after the lead from post six at the start of the ninth race feature.

Points North and driver Jonathan Drury also wanted the front and they took over the lead by the opening quarter mile in :27.3.

Then it was O’Brien award winner Wheels On Fire, the 4/5 race favorite with driver Doug McNair coming first-over and clearing to the lead by the half mile marker in :54.3.

The action continued towards the final turn with Roy moving first-over from third place with a burst of speed, nearly clearing to the lead by the three-quarters in 1:23 with Commanding Officer (Sylvain Filion) following second-over.

Coming down the stretch, Jimmy Freight was the strong horse, winning with ease by one and one-half lengths over Wheels On Fire with Points North third. The time of the mile was 1:50.3.For Jimmy Freight it was his third win in his last four starts, all in the Preferred class at Mohawk. It was the sixth win in 12 starts this year for the seven-year-old stallion by Sportswriter. He is trained by Richard Moreau for owner Adriano Sorella of Guelph, ON. He paid $6.60 to win.