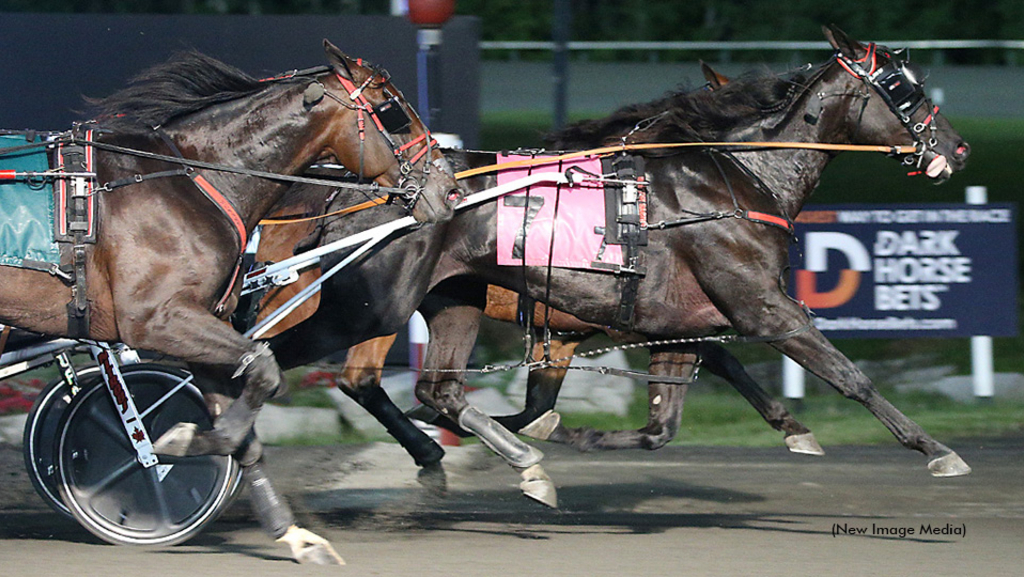 Sophomore trotters were in the spotlight on Friday evening (June 10) at Woodbine Mohawk Park for the eliminations of the Goodtimes Stakes.

Fast As The Wind took care of business as the heavy favourite in the first elimination. Driver Dexter Dunn moved the Tony Alagna trainee to the top from third entering the backstretch and never looked back, posting fractions of :56.4 and 1:25.3 en route to a 1:53.2 score.

“He’s really fast and he was still travelling really good coming off the turn,” said Dunn. “I was confident he was going to kick away there and he did.

“He finished last year off so strongly and he’s come back better this year and his qualifiers and his races have been super, his last quarters have been really strong, so [that] gives you lots of confidence.”

A son of Cantab Hall, Fast As The Wind had finished second and third in his previous two outings this season, both against older foes. The Alagna trainee had a busy rookie season, winning five of 15 starts, including a major victory in the Valley Victory. Fast As The Wind has now earned $587,727 for owners LeBlanc and Kribbs, Joe Sbrocco and Joe Barbera.

Looks Like Moni (Andy McCarthy) did the road work, cutting out fractions of :28, :56.4 and 1:25.2, while Twin B Archie sat right behind in the pocket. Turning for home, Twin B Archie angled out and muscled by to win by a head. World At War Deo (Jody Jamieson) came into the mix late to finish third.

A gelded son of Archangel, Twin B Archie improved to three-for-four this season, now sporting a Grand Circuit victory to go with his triumph in the SBOA Stakes. The 2021 OSS Super Final winner has seven wins and $398,866 in career earnings for owners McEneny, Domenic Chiaravalle, Floyd Marshall and Marwest Racing Stable.

“He fought right to the wire,” said McEneny of Twin B Archie’s effort Friday. “He can go with these guys and hopefully get a good trip next week and have a shot at it.”

The post position draw for next week’s final took place immediately following the eliminations. The connections of Fast As The Wind and Twin B Archie were able to select their post for the final by virtue of their victory on Friday.

The field for the $251,000 Goodtimes Stakes is listed below:

The post position draw for the Armbro Flight Stakes also took place on Friday evening. The $211,000 event for older trotting mares did not require eliminations. The final will also take place on Saturday, June 18, as part of the Pepsi North America Cup card.

The field for the $211,000 Armbro Flight Stakes is listed below: