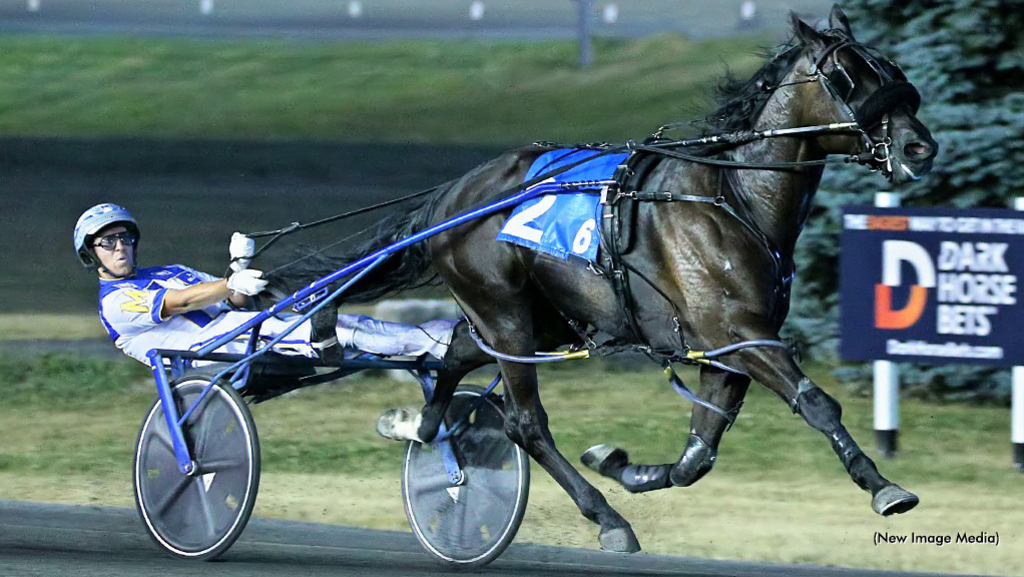 Tim Gillespie trainee Kolby Two Step opened the Gold action with a career-best 1:49.2 score in the $102,200 first division. The gelded son of Betterthancheddar appeared poised for a breakthrough effort and received a more aggressive steer on Saturday from driver James MacDonald.

“He’s a small stable horse and they’ve been asking me to take care of him,” said MacDonald. “He’s got a big kick finishing and I’m happy to race him that way, but every now and again he gets a little complacent. Last week he kind of took himself off the gate and followed, so every now and again you got to shake him up and let them know you got to race. He was nothing but professional tonight and he had tons left.”

Kolby Two Step and MacDonald moved out from third entering the backstretch to follow favourite Macho Phil to the front. He then led the field of eight by the half in :54.3 before engaging in a third-quarter duel with Sport Secret, tripping the timer in 1:21.4.

Having put away Sport Secret, Kolby Two Step continued to dig in down the lane and powered home to the 1:49.2 score.

Reinsman MacDonald believes the victory was a glimpse at what Kolby Two Step is all about.

“He showed he’s one of the best in the division tonight.”

Making his debut for new connections and first appearance in Ontario, Southside Eddy came up with a big effort of his own to finish second by half a length. The Betterthancheddar colt led by the quarter in :26.2 before getting shuffled back, ultimately escaping to the far outside in the stretch for a strong rally. Carmen Auciello trains the sophomore.

Owned by Gillespie and Jason Churchill, Kolby Two Step is now one for six this season with $110,400 earned. The Gillespie trainee was a top performer in his rookie campaign, winning three of six starts and earning $114,137.

The evening’s $101,300 second division saw a returning Stonebridge Helios strike for a 1:51 score.

Now trained by Gregg McNair, Stonebridge Helios capitalized off a second-over trip from driver Doug McNair to win in his first start since the Pepsi North America Cup eliminations on June 11.

Magical Arthur cut the mile, posting fractions of :27.1, :55.4 and 1:23.4. Stonebridge Helios edged out from fifth at the half to sit second over behind Acapulco Sunburn. Those two squared off in the stretch with Stonebridge Helios getting the upper hand to win.

Ron made a late bid to finish second by a neck. Acapulco Sunburn finished third, while Mr Beast was fourth.

A Grand Circuit winner at age two, Stonebridge Helios started his three-year-old season strong by winning the SBOA Stakes before a third in the Somebeachsomewhere and a break in the NA Cup elimination. A slight change to his ownership group saw the colt moved to Gregg McNair’s barn in late June.

“We had him ready to go once there three weeks ago, but then he came up sick and we had to scratch him,” said Gregg McNair. “He probably had ten days off from training and then we trained him again and he’s been super training, but it’s not like racing. I said to the owners that it’s like having a new car around and not being able to drive it.”

Stonebridge Helios is owned by John Fleischman and Angie Stiller. The Sunshine Beach colt is now three for five this season and seven for 12 lifetime. His career earnings moved to $429,760 with Saturday’s win.

The third OSS Gold leg for three-year-old pacing colts and geldings is scheduled for August 7 at Georgian Downs.